Holi: A Festival of Colours & Joy


Holi is a celebration of the onset of spring. Farmers celebrated happy harvest every year at this time and welcomed the season of spring with celebrations. Since then, the tradition of celebrating with dance, music and colours started.
Once upon a time, the colours used during Holi were prepared from the flowers of trees that blossomed during spring like flowers of ‘tesu’ or ‘palash’ tree and known as gulal. Most of these trees also had medicinal properties and the colours obtained from them were highly beneficial to the skin and body. With the rapid commercialisation of this festival and a strong demand for other colours, artificial colours,consisting of a large number of chemicals, became easily available. These poses serious health issues.
The best way to prevent any powder from sticking to your skin is to moisturise well beforehand. Some people also oil their hair so that the powder is easier to remove, or wear a hat. It is also recommended that anyone taking part uses home-made powders with ingredients that are guaranteed to be non-harmful or use oraganic colors . One way you can do this is by putting together a mix of flour, water and a few splashes turmeric(yellow), red rose petals(red), jaccarda flowers(blue), mehendi(green).
Holi, known as the ‘festival of colors’ is celebrated on the full moon day falling in the month of Phalguna (Feb-Mar). It takes place over two days, and is a celebration of fertility, colour, and love, as well as the triumph of good versus evil. The word "Holi" originates from "Holika", the evil sister of demon king Hiranyakashipu.
As per ancient mythology, blinded by special powers King Hiranyakashipu, grew arrogant, thought he was God, and demanded that everyone worship only him. However, his own son, Prahalad refused to worship his father and remained a true devotee of Lord Vishnu. Out of frustration and anger, Hiranya Kasyap tries to kill his son Bhakta Prahlada by using his sister Holika, who is fire resistant, then due to the blessing of Maha Vishnu Prahlada came out from the fire safely but Holika burnt in that fire. Lord Vishnu arrived in the earth as Narasimha avatar and killed Hiranyakashyap portraying the victory of good or evil.
Another legend goes with Lord Shiva. Shiva is known for his meditative nature and his many hours spent in solitude and deep meditation. Madana, the God of love, decided to test his resolve and appeared to Shiva in the form of a beautiful nymph. But Shiva recognized Madana and became very angry. In a fit of rage he shot fire out of his third eye and reduced her to ashes. This is sometimes given as the basis of Holi's bonfire.
It also draws on the legend of enduring love between Lord Krishna (an incarnation of Vishnu) and Radha. It is said that as a child, Sri Krishna was envious of Radha’s fair complexion, and on the advice of his mother, he went and playfully painted her face so it was the same colour as his. It is said that lovers often celebrate Holi in this tradition, by colouring their faces the same colour during the celebrations.
The timing of Holi is synchronised with the moon, which means that the dates of each celebration varies year on year. Holi is split into two events: Holika Dahan and Rangwali Holi. This year Rangwali Holi will take place on 2 March 2018  while the pyres of Holika Dahan will be burned the evening beforehand.
Holika Dahan takes place the night before Rangwali Holi. Wood and dung-cakes are burned in a symbolic pyre to signify good defeating evil (According to hindu Mythology, the God Vishnu helps burn the devil Holika to death). This year, Holika Dahan will be celebrated on March 1. Timings for the Holika Dahan will be from 6 pm to 8: 30 pm after the Bhadra period is gone.
The next morning, people gather in public spaces and take part in Rangwali Holi. This is a raucous affair where people chase each other around, throwing handfuls of coloured powders (known as gulal) at one another, while getting drenched in water. Social gatherings such as parties with food are organized at several places. Parties, and spending time with friends, family and other loved ones are also crucial aspects of Holi. Moreover, giving out sweets and delicacies is another important part of the festival’s celebrations. That’s why this festival is also known as the Festival of Spreading Joy. Holi is a relatively secular one. People take part in Holi all around the world, but it is celebrated the most in parts of India and Nepal.
This year Google is celebrating Holi with a new festive doodle that seeks to bring out the colourfulness associated with the festival. Characters in blue, red, yellow and green celebrating Holi replace the traditional Google logo that has its letters painted with those very colours. The Google Doodle depicts dhol players, those who love spraying colour through pichkaaris and those who colour others with traditional gulaal as well. The festival, which marks the end of winter and the coming of spring, symbolically shows the triumph of good over evil.
The four main colors of Holi in the Google Doodle represent many different things that are in line with the festival. Red stands for love, yellow is the colour of turmeric, which is a powder used as an anti-septic, blue represents the Hindu god Krishna and green symbolises new beginnings with the coming of spring. The Google Doodle has been designed by Amrita Marino.
The festival of Holi is celebrated all across the country with a lot of enthusiasm and gaiety. Holi also fosters unity among people as the festival also includes the tradition of forgiving enemies and letting go past grudges. Let the essence of colours of holi compel us to hope for a dreamy world full of rainbows.... 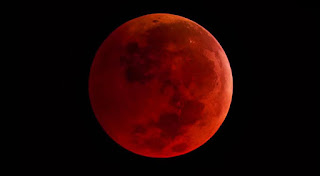 A rare celestial treat will colour the skies on Januay 31,2018, when a Blue Moon, a total lunar eclipse and a supermoon all rolled into one. NASA has even dubbed the event a "Super Blue Blood Moon," as it will occur near when the moon is at its closest point to Earth, a so-called "supermoon." There hasn’t been a triple lineup like this since 1982 and the next won’t occur until 2037.
The first event is a total lunar eclipse that happens on the morning of Jan. 31. This eclipse will be special! The moon will be both "super" and "blue," and if skies are clear, skywatchers in North America will be able to see all or part of the eclipse.
Blue Moon occur when two full moons happen in the same calendar month; blood moon occur when the moon passes into Earth's shadow; and supermoon happen when the moon's perigee — its closest approach to Earth in a single orbit — coincides with a full moon. In this case, the supermoon also happens to be the day of the lunar eclipse. According to Space.com, best place to see it will be in central and eastern Asia, Indonesia, New Zealand and Australia.
Blood Moon:
During a total lunar eclipse, though the Moon gets shadowed by the Earth, sunlight passing through the Earth’s atmosphere, break down in its constituent colours and the red part gets scattered by the atmosphere and falls on the Moon's surface, thereby making it take on a reddish copper hue. That’s why a totally eclipsed Moon is called a “Blood Moon”, as the colour of the Moon looks blackish-red.
A lunar eclipse can only happen at full moon. Only then is it possible for the moon to be directly opposite the sun in our sky, and to pass into the Earth’s dark umbral shadow. Most of the time, however, the full moon eludes the Earth’s shadow by swinging to the north of it, or south of it. For instance, the last full moon on January 2, 2018, swung south of the Earth’s shadow. The next full moon – on March 2, 2018 – will swing north of the Earth’s shadow.
Super Moon:
A super moon usually takes place every one to two years, when the full moon coincides with its closest approach during its monthly orbit to Earth. Because the moon has an elliptical orbit, one side - called the perigee - is about 48,280 km (30,000 miles) closer to Earth than the other side (the apogee). The term was coined by astrologer Richard Nolle in 1979. During the phenomenon, the full moon appears about 14 percent and 30 percent brighter that it would during regular full moons. When this Earth-Moon-Sun system occurs with the perigee side of the moon facing us, and the moon happens to be on the opposite side of Earth from the sun, causes the moon to appear much bigger and brighter in our sky than usual, and it's referred to as a supermoon - or more technically, a perigee moon.
Blue Moon:
Usually full moon happens approximately once a month, or every 29.5 days.A blue moon normally occurs about once every two and a half years. This month’s first full moon was on 1 January.
A Moon that actually looks blue, however, is a very rare sight. The Moon, full or any other phrase, can appear blue when the atmosphere is filled with dust or smoke particles of a certain size; slightly wider than 0.7 micron. The particles scatter the red light, making the Moon appear blue. This is known as Mie scattering, and can happen for instance after a dust storm, a forest fire, or a volcanic eruption.
Interestingly, while you search about “Super blood blue Moon,” in internet, you may see that it is happening after 152 years and the last time it happened was in March 31,1866. But this is true only for the Americas, not for everywhere on the globe. In Asia, the last Blue Moon and total lunar eclipse happened on December 30, 1982.
The moon is one of the most amazing objects in our solar system, and it had often helped us study our solar system. Total eclipses of the Moon are spectacular events and are easy to see with the naked eye. NASA scientists say the way the moon's surface responds during the eclipse can provide insights about where to land a rover for a future mission.
The best tip for anyone trying to see the eclipse is to get a clear view of the horizon and look in the west-northwest direction. It can be seen through the naked eye though using a telescope could make for a fun experience. Just step outside, look up at the sky, and enjoy! It's an astronomical trifecta which will occur once in someone’s life time... Don't Miss it...
For anyone who can't go out side, NASA has started its live stream of the total lunar eclipse that will occur with a blue moon, known as a Super Blue Blood Moon, for people to see the spectacular event unfold. Here you go: https://www.nasa.gov/multimedia/nasatv/index.html#public