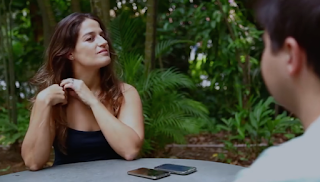 Don’t be surprised when a woman absentmindedly strokes her hair in public. She might be actually activating any one of her smartphone apps… Though sounds unlikely, it is possible now. A Brazilian inventor, Katia Vega, has developed an innovative new wearable gadget that allows users to discreetly control electronic devices by just stroking their hair.

The new Beauty Technology Prototype known as Hairware connects chemically metalized hair extensions to a microcontroller turning it into an input device for triggering different objects. It is actually a switch woven into hair extensions that can be used discreetly to activate apps. The extensions can be used as a wireless input device for mobile phones, and can be programmed to open applications, send preset messages, or broadcast a person’s location. According to inventor, a woman who is feeling threatened could use Hairware to broadcast her location, or activate a preset emergency text message, without visibly using the phone.

Hairware acts as a capacitive touch sensor that detects touch variations on hair and uses machine learning algorithms in order to recognize user’s intention. An Arduino microcontroller and a bluetooth radio in a hairclip provide the system's intelligence and connectivity, with an algorithm, which avoids accidental activation, learning over time when the user has intended to trigger an action.

Normally, while someone touches her own hair, unconsciously she is bringing comfort to herself and at the same time is emitting a non-verbal message decodable by an observer. The touch of a user’s fingers changes the hair’s ability to store an electric charge ever so slightly. This hair's ability can be used to set controls. For example, stroking it once activates one app and touching twice launches another. And because stroking our hair is a natural human activity, no one need know what the user is doing.

Hairware brings the opportunity to make conscious use of unconscious auto-contact behaviour. I.e. touching her hair is an unconscious action that woman do for getting more comfort. Using Hairware, they will replay this act on her hair but she is not just emitting a message to an observer, she would be triggering an object, creating a concealed interface to different devices.

The main advantages are interesting… No one knows that the user is wearing a device which can make possible concealed interactions. Also no one knows that the user is triggering an event and that the body surface is being used as a novel wearable interface by transforming materials into devices that look like body parts. In future, it can be used by intelligence agencies to gain secretive information, such as taking a photo or recording a conversation.

As hair is generally a focus of women, Hairware could be used as a tool for protection against risky situations. In this way, it could be used as an alarm device sending messages with the user’s location. It can be used in personal security, particularly for women, foresees potential applications for intelligence agencies.

As the video shows, this technology can be used to record a conversation, send location, or even take a selfie. The possibilities are endless here.

It adopts a seamless looking approach to wearable computing. It implements a wearable aspect to an existing part of the body in order to integrate technology with organic matter. Wearing a smart watch is one thing, but having technology as a part of your body such as skin or hair may require a little more convincing(I think). As it is removable and self-contained, there is no complicated setup required. This is something that could be useful in every field. But don’t get too excited to purchase this product for your daughter, sister, or mom as it's still in the development phase. I hope Vega soon commercialize the product .

Excuse me Men, here is some happy news for you too…Vega is planning to extend Hairware and turn beards into active app controllers too.
at 3:42 PM