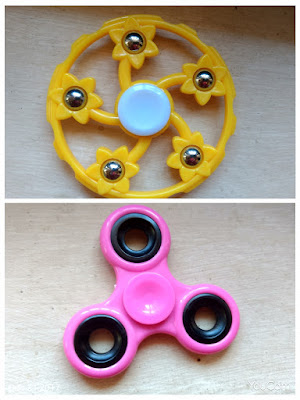 The hottest toy of the season, fidget spinner, has made their way into the fingertips of many to help with anxiety attacks."Fidget spinners" are small, ball-bearing devices that the user can rotate between his or her fingers. Made up of a variety of materials from metal to plastic, designs varying anywhere from 2-5 propellers that surround the center bearing and when spun it maintains its momentum by continuing to spin the object. The most popular of the models happens to be the tri-spinner fidget toy.
Numerous studies discuss the benefits that fidgeting has on the body, how it boosts memory, focus and creativity. And a recent study published in the American Journal of Preventive Medicine found fidgeting can make you healthier. Fidget spinner are the biggest gadget trend of 2017. These aren’t just for kids either, individuals of all ages can benefit from using fidgets, but especially individuals with the following:
Fidget spinners were invented by Catherine Hettinger, who showed her invention to Hasbro way back in 1997. The 62-year-old had a patent from 1997 until 2005, but was not able to afford the fee to renew her exclusivity to the gadgets, which was $400, the equivalent of around £310. No wonder why she stays away from scene!
A fidget spinner was launched as a toy that was mainly marketed as a stress relieving device. These are devices that are portable enough to fit in the palm of your hand.
How does it work? It spins around and creates a hypnotic effect. This is meant to relieve stress and anxiety as your brain is involved in a manner, which provides you comfort in stressful situations. Therefore, when an autistic child plays with a fidget spinner, the brain of the child is believed to release happy or stress relieving hormones. The continuous movement of the gadget helps in keeping the child focused on one activity which involves a great deal of concentration. Thus by using the fidget spinner, the children are expected to curb down the symptoms of autism which are mainly caused by hyper-sensitive sensory nerves. The tactile sensations, as well as the vision of things spinning steadily are reported to induce soothing feelings to the easily stimulated minds.
Spinners give your hands something constructive to do when you feel nervous.
Fidgets can take away the focus of tension (i.e. a conversation, a test, etc…) and instead re-directs it to the spinner.
Spinners restore some control back to the individual during perceived “out of control” situations, empowering them with more confidence and security.
One of the things which people like about fidget spinner is that it produces distinctive and unique imagery effects when being spun. Of cousrse therapeutic benefit similiar to the motion of fish in ponds or from staring at the bonfire can be obtained from observing the visualization produced by the spinner
Taking the fidgets for few spins can help easing the dreadful feelings inside our minds, because the ball bearings inside the body act as support to maintain the spin with the minimal efforts. The perpetual motions of the spinner induces the feelings of maintaining order and assurances that everything going on just fine.
Because spinners are a fun, unique fidget coming in all different sizes, shapes, and colors, many kids are curious about them and will strike up a conversation about them. Yeah , it can be used as a conversation tool..
As a mother, I think these are good toys for kids.These little gadgets may just keep your kids off the electronics and desiring to attempt tricks and be outside with these spinners to test what they can do. Anything that helps keep kids off electronics must be a good thing, right?!
Some of the points to keep in mind regarding fidget spinners are:
at 1:36 PM

Thanks for ur love...